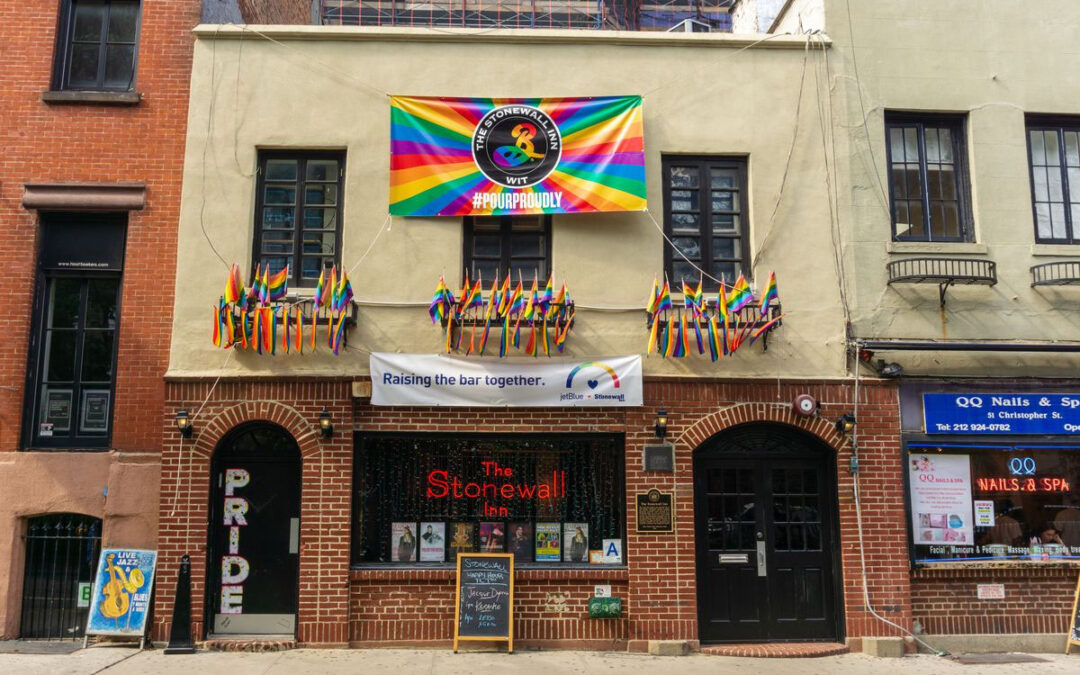 Every year across America the LGBTQ+ community celebrates during the month of June. We see rainbow flags that show support and solidarity for this community, in addition to colorful parades. In honor of Pride month, it is important to take a look back at the history of Pride Month and revisit the events that helped to shape and create this annual celebration such as the events at Stonewall Inn and the creation of the first Pride flag. 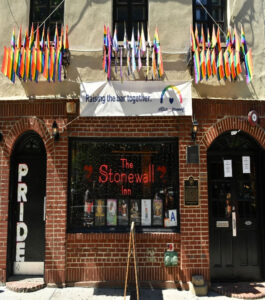 In the 1960’s in Greenwich Village, New York, there was a nightclub called The Stonewall Inn was classed as a “bottle bar,” where patrons would bring their own drinks to the club as it did not have a liquor license to sell alcohol. The bar was a safe refuge for Drag Queens and other homeless LGBTQ youth to find a commonplace to be their authentic self without judgment or harassment. It is important to remember that at this time, men “masquerading” as women or better known today as Drag Queens, were illegal. The Stonewall was one of the only nightclubs that welcomed Drag Queens and dancing in the area. The reason why the club was so safe and devoid of any raids was due to the owners of the club being connected to the to the Mafia, with the crime family bribing some of the New York city police to give notice to any planned raids on the bar.

One night in late June of 1969, the safety the club provided failed as the police planned and successfully executed a raid on the Stonewall Inn. The reason behind the raid, according to the police, was that the club did not have a liquor license required by the city of New York to serve alcohol on site. With the police having the upper hand, another raid was planned for the following week, with the intent to shut down the club for good. Several police men and women, out of uniform, entered the club in the early hours of June 28, 1969, setting their sights on employees and Drag Queens. As the arrests continued, more and more spectators gathered outside. What exactly set off the riot is unclear. Some reports say that transgender women of color Marsha P. Johnson and Sylvia Rivera threw the first bottles or bricks toward the police. Other accounts say these women were not on the scene until much later in the morning, well after the riot was underway, whatever sparked the riots it lasted until the early hours that day.

In the following days after the fateful night in June of 1969, law enforcement’s plan to shut down the Stonewall Inn failed. The Stonewall Inn did not close. In fact, it opened the following night with only one change; it no longer served alcohol. There were no reported injuries or deaths that occurred following the riot. Over the next few nights, more and more of the LGBTQ+ community and allies came out to support what happened. The crowd was heard chanting “gay power” and “we shall overcome.” These few but powerful days are what many feel led to the LGBTQ+ movement that we have today.

One year later, June 28, 1970, was the first Pride parade. The parade would begin at the Stonewall Inn and go some 15 city blocks. New York City was not the only city; some other major cities such as Los Angeles, San Francisco, Boston, and Chicago also planned a Pride parade for that same day in June 1970.

Prior to the Rainbow flag, the symbol of the LGBTQ+ community was an upside-down pink triangle. This was reappropriated from World War II and had a dark history attached to it. However, with the momentum that the events at the Stonewall Inn created, it was clear that a new, more inspiring emblem was needed.

The creator of the first Pride flag was Gilbert Baker, a Drag Queen, artist, and Vietnam Veteran. He was commissioned by the politician Harvey Milk, in San Francisco to create the iconic design we know today. In 1976, two years before the events at Stonewall, the country celebrated its 250th birthday, the Bicentennial celebration. As the American flag inspired independence, Baker wanted to create a flag that too would create a feeling of solidarity and community. 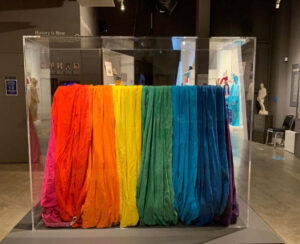 In Baker’s own words, here is how and why he chose a rainbow for the flag:

“A Rainbow Flag was a conscious choice, natural and necessary. The rainbow came from earliest recorded history as a symbol of hope. In the Book of Genesis, it appeared as proof of a covenant between God and all living creatures. It was also found in Chinese, Egyptian and Native American history. A Rainbow Flag would be our modern alternative to the pink triangle. Now the rioters who claimed their freedom at the Stonewall Bar in 1969 would have their own symbol of liberation.”

The original flag consisted of eight colors with a meaning associated with each. Starting at the top, hot pink symbolized sex, red for life, orange stood for healing, yellow represented sunlight, green for nature, turquoise stood for art, indigo represented harmony and the last color, violet, was associated with spirit. The current flag omitted hot pink and turquoise and replaced the colors with blue.

As we approach the month of June, we hope that reading, or in some cases, re-reading, the history of the LGBTQ+ movement will inspire you to be you, your authentic self. If you would like to talk to a trained therapist on your sexual orientation, gender identity or the coming out process, please call Good Therapy Counseling at 630-473-3971 or email us at intake@goodtherapycounseling.com

What Happened at the Stonewall Riots? A Timeline of the 1969 Uprising – HISTORY